A Sermon for Good Friday

I am not sure it is a good thing to preach at all on Good Friday. The liturgy is long enough and speaks for itself. This said, there will be no liturgy this year, so let’s risk a few words. In a way, there is not much to say. What can one say to people who remember and mourn the death of someone they love, as we today, commemorate the death of Jesus? I have visited enough bereaved people to know that words are at best somewhat futile, at worst inappropriate. So I’ll keep it short, for today we have lost Christ.

The mystery of Easter unfolds in three nights, in three times of darkness. Yesterday was the night of his arrest and trial. This is the second night, hours of darkness that happened during the day. Luke wrote: “It was now about noon, and darkness came over the whole land until three in the afternoon, while the sun’s light failed and the curtain of the temple was torn in two; then Jesus, crying with a loud voice said, “Father, into your hands I commend my spirit.’ Having said this, he breathed his last.” (23.44 ff.) I suspect that a lot of us here are old enough or unfortunate enough to have lost someone close, someone they loved. We all have known times when light fails and, almost literally, day turns to night. This was splendidly described by Wystan Hugh Auden in a poem made famous in Four Weddings and a Funeral.

Stop all the clocks, cut off the telephone,
Prevent the dog from barking with a juicy bone,
Silence the pianos and with muffled drum
Bring out the coffin, let the mourners come.

Let aeroplanes circle moaning overhead
Scribbling on the sky the message: “He is Dead.”
Put crepe bows round the white necks of the public doves,
Let the traffic policemen wear black cotton gloves.

He was my North, my South, my East and West,
My working week and my Sunday rest,
My noon, my midnight, my talk, my song;
I thought that love would last forever: I was wrong.

The stars are not wanted now; put out every one,
Pack up the moon and dismantle the sun,
Pour away the ocean and sweep up the woods;
For nothing now can ever come to any good.

Pack up the moon and dismantle the sun. Let darkness come, let sleep come. I don’t know if you remember but expecting someone you love to die is a nerve-racking experience. You never relax. You cannot sleep as you expect the phone to ring any minute, bringing bad news. You wish you could cut off the phone, as Auden says, but you keep your mobile on vibrate, and every vibration, every sudden ring squeezes the life-blood out of your heart. You dare not have a drink in the evening, even though you think it might ease the fear, for you might have to drive to the hospital at any moment… You know it’s not quite true, you’ve been waiting for weeks, but you could never forgive yourself if it happened right now and you felt unable to drive. You dread things that to that day were perfectly harmless, like lighting a cigarette or seeing the light flash on the answering machine… and fear of loss plays all sorts of tricks on your mind which have been assiduously analysed by psychologists over the last decades or so.

It is probable that, unless one has lived through such times, one cannot understand in depth what it must have been like to be one of Jesus’ close friends on the night of his agony, for the Gospels are still raw from the experience. Details in their text of no apparent great concern can make one certain that the accounts of Jesus’ passion were written by people who loved him deeply. They are theological texts of course, not to be always read literally but, however superficially unlike the world we live in, their characters and events may be, they nevertheless hold up the mirror to the only nature we know, our own; in this, too, the Gospels have succeeded superbly.

Take Peter for instance. His experience, his fear and grief as described in the Gospels feel so real. For what are the stages of a loss process? Well, learned books and experience tell us that first we tend to deny that loss has occurred, or that it will. It can take many forms, wishful thinking, magical thinking, as if by supernatural intervention our loss would go away. “Then Jesus said to his disciple: ‘Put your sword back into its scabbard, for all who take the sword will perish by the sword. Do you not think that I could appeal to the Father and he would at once send me more than twelve legions of angels?” Yes you do, don’t you Peter? Else you would not want to fight. But this is not how God wills things to be. This is not so that Scripture must be fulfilled. Jesus rebukes the disciples’ fantasies, and yet they cannot bring themselves to admit what is happening.

This is another feature of our human way of dealing with loss. There can be excessive fantasy believing nothing is wrong, nothing can go wrong. When we wake up, everything will be fine. Now one day, “Jesus began to show his disciples that he must go to Jerusalem and undergo great suffering at the hands of the elders and chief priests and scribes, and be killed, and on the third day be raised. And Peter took him aside (notice that he won’t say this publicly) and began to rebuke Jesus, saying: ’God forbid it, Lord, this will never happen to you.’” (Mt 16.21-22) He thought that love would never die. He was wrong. He heard it from Jesus’ own mouth in no uncertain terms: “Get behind me, Satan, you are setting your mind not on divine things, but on human thoughts.” You are deluding yourself, fantasising as humans do.

But these words did not sink in Peter’s mind. He was still denying that any loss could occur. Another feature of our grief process that we can see in the Gospels is our tendency to bargain, to strike a deal with ourselves, or God, or others to make the loss go away. We can promise to do anything to prevent loss from happening: “Though all become deserters because of you, I will never abandon you,” Peter said. Indeed, even Jesus was tempted to bargain or promise to prevent the ordeal: “Father, if it be possible, let this cup pass away from me.” But nobody could have been there to hear these words and I wonder if we do not see in these the experience of those who wrote the Gospels rather than Jesus’ own experience.

When we grieve, when we fear loss, we can begin to have uncontrollable spells of crying, sobbing and weeping, and guilt, believing we are responsible for our loss. And Peter wept bitterly and he too believed that Christ died because of his sins. All was his fault. But more frequently even we vent the blame on others, we look for scapegoats, and the Gospels are full of that too, those terrible passages about the liability of the Jews for what had happened. “His blood be on you and on your children” is not something anyone in his right mind would say or write, only someone still in the grips of grief. Another frequent feature of our grief is rejection, believing that we can reject the truth by rejecting the news of those who confront us with the reality of what is happening.  This Peter experience at the news of the disappearance of Jesus’ body: “Now it was Mary Magdalene… and the other women who told this to the apostles. But these words seemed to them an idle tale, and they did not believe them. But Peter eventually got up and ran to the tomb; stooping and looking in, he saw the linen cloth by themselves; then he went home, perplexed as to what had happened.” (Lk 24.11-12)

It takes time, years sometimes, to get over the last stages of grief, over despair and guilt and over the depths of one’s emotional response and to begin to experience acceptance. But the Gospels end the story here. They leave us with an empty tomb to deal with tonight, and sheer grief, and the mystery of Christ’s descent into death. As Auden once more put it in another poem

[From The More Loving One, in  Homage to Clio ] 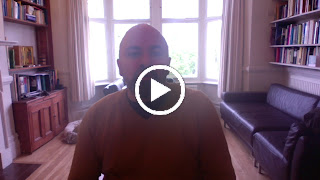